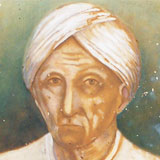 Translation by Sri Shankar Prosad Chatterjee, Advocate, from Bengali into English of relevant pages of the Book entitled “Kavi Ranglal Banarjee” by the poet’s author son late Shiblal Banerjee, A Govt. Officer (S.D.O)
In the beginning of 18th Century emperor Aurangzeb went to the Deccan for invading Ahmednagar when his Omrah Agha Motaher was awarded a Jagir in respect of Santganpargana. Aurangzeb died in 1707. In order to manage this Jagir Agha Motaher came with his wife to Hooghly and settled there. Santganpargana at that time consisted mostly of low and marshy land. Thus from the time the entire low land of Kidderpore was under the management of Hooghly Zamindary instead of 24-Parganas Authority.

Agha Motaher died leaving behind him his (1) widow and only (2) daughter Mannujan Khatoon. Agha Motaher made a will in favour of his daughter only and gave all his properties to her before his death. This agreeved the widow who then married Hazi Faizullah. Out of this wed-lock Hazi Mohammad Mohsin the great, was born in 1732.

Munnujan Khanum married one Mirza Alauddin Mohammad. After the marriage her Zamindari became known as Mirza-al Zamindary. Now speaking of Kidderpore it is found that the Zamindary in Kidderpore comprised of Taluk No.92 in which the properties amongst others are (1) (Munshigunge Area) (2) (Muchikhola Area) now known as Garden Reach (3) (Kapidanga Area) now known as King George Dock. (4) (Alip Nagar Area) now known as Taratala. (5) (Daulatpure) that is from bridge No.(1) of Dock No.(1), Dumayu Avenue and Sonai (6) Sonaibazar to Coalberth of C.P.C. (7) Soingarhati - Fatepure Area (8) Kalibagan. Bhukailash Area and lastly No. (9) Ramchandrapure renamed as Mominpore.

When Munnujan Khanum became a widow she made a gift of all properties belonging to her brother Haji Mohammad Mohasin who remained unmarried throughout his life. He made the entire property a Wakf and died in 1812. Subsequently due to mis-management by Mutawallis the entire property was transferred to the Board of Revenue for management.

Thereafter, the Government remained in undisputed possession of the properties of the Endowment till 1863 when the Religious Endowment Act (Act-XX of 1863) came into force. The Government’s Order no. 4036 of 30th October, 1863 directed, “a committee must be appointed to take the place and exercise the powers of the Board of Revenue and of the Local Agents and when appointed, will perform all the duties of the Board and the Agents except in respect of property especially provided for under Section 21 of the Act.” The income of the Endowment was divided into 9 shares.

Committee of Management, The Hooghly Imambarah was thereafter appointed once for all and then by its order no. 219 dated 26th January, 1876 the Government directed the Board of Revenue not to transfer to this committee the charge of Syedpore Estate but only to make over to it that portion of the proceeds of the Endowment of late Haji Mohammed Mohsin which was appropriated to religious uses. Thus a fund or call it a Local Fund was created as noted hereunder:-
1/9th Share for Salary of Mutwalli.
3/9th Share for Committee of Management, for religious purposes.
4/9th Share for Secular purposes.
1/9th Share for Education.

In addition to the aforesaid fund, the Government by its order vested Kharij Touleut estates in the religious manager of the Imambarah as a trust for the purposes of the Institution but directed the same to be placed under the control of the Imambarah Committee and further directed that their accounts should be kept separate from those of the original Endowment or Waqf.